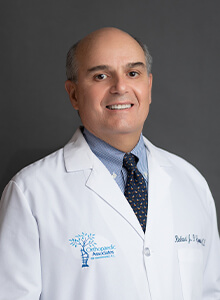 Richard D'Agostino, MD, received his bachelor of arts from Johns Hopkins University in 1978, where he was elected to the Alpha Epsilon Delta Premedical Honor Society. He is also a member of The Second Decade Society. He earned his medical degree from the Mount Sinai School of Medicine in 1982 and completed both his internship in general surgery (1983) and his orthopedic residency training (1987) at Mount Sinai Hospital. Dr. D'Agostino then completed a post-residency fellowship in sports medicine, arthroscopy, knee, shoulder, and related surgery at the New England Baptist Hospital in Boston, Massachusetts in 1988.

Dr. D'Agostino is chairman of the Department of Orthopaedic Surgery at St. Francis Hospital in Roslyn, New York, and director of the orthopedic service line of the Catholic Health System. He is an attending physician at the North Shore University Hospital at Manhasset, as well as a faculty member and associate professor at Hofstra University School of Medicine. He is an attending at the East Hills Surgical Center in Roslyn, New York.

Dr. D'Agostino's specialty interests include arthroscopic surgery of the knee, shoulder, elbow, and ankle. He is a former member on the development team of a shoulder replacement system, and he is a national lecturer and instructor in innovative knee and shoulder procedures, including work at the Orthopaedic Learning Center (OLC) in Chicago. As a clinical investigator involved in the development of articular cartilage repair procedures, Dr. D'Agostino was recognized for his work in a national forum.

Dr. D'Agostino has devoted his practice to the care and treatment of athletes and their injuries. He has worked with athletes at all levels, including collegiate, professional, and Olympic men and women. His sports medicine experience includes serving as: