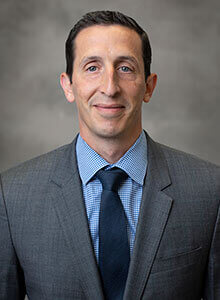 Andrew Greenberg, MD, received his undergraduate education from Emory University with a bachelor of science in anthropology and human biology. Prior to attending medical school, he performed a year of cancer research at the Memorial Sloan-Kettering Cancer Center, focusing on bone marrow transplantation.

Dr. Greenberg received his medical degree from New York Medical College in 2006 and completed his internship in general surgery (2007) and four-year residency in orthopedic surgery (2011) at the North Shore University-Long Island Jewish Medical Center, where he served his final year as chief resident.
During his residency, Dr. Greenberg earned several accolades including Resident of the Year in 2008 and the Award for Clinical Excellence in 2011. After his residency, Dr. Greenberg completed a fellowship in hand and upper extremity surgery at the prestigious Hospital for Joint Diseases.

Dr. Greenberg specializes in the operative and nonoperative management of hand and upper extremity disorders, including traumatic conditions, arthritis, and sports-related conditions. He has special interests in upper extremity fracture care, tendon and nerve repairs, carpal tunnel and other nerve compression syndromes, and reconstructive surgery of the hand. He has additional interests in the arthroscopic management of many wrist and shoulder conditions, including injuries to the labrum, rotator cuff, and triangular fibrocartilage complex (TFCC) in the wrist.

Dr. Greenberg has produced multiple publications, including textbook chapters, review articles, and peer-reviewed journal articles on a wide range of orthopedic conditions. His research has been presented at the national meetings of several orthopedic societies. He is a member of the American Academy of Orthopaedic Surgeons (AAOS) and the American Society for Surgery of the Hand (ASSH).

Schedule your appointment with Dr. Andrew Greenberg at Orthopaedic Associates of Manhasset by calling (516) 627-8717 or request your appointment now. We look forward to seeing you soon at one of our 3 convenient locations on Long Island, New York.