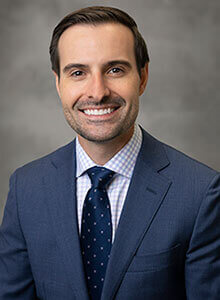 Dr. Capogna attained his medical degree at the Albert Einstein College of Medicine and graduated with distinction in orthopedic research. He was also a member of the Alpha Omega Alpha (AOA) medical honor society, an honor given to only the top 5% of aspiring doctors. Dr. Capogna went on to train in orthopedic surgery at the nationally ranked NYU Hospital for Joint Diseases in Manhattan, New York, where he was named executive chief resident. During his residency Dr. Capogna received training from renowned orthopedic surgeons, including Dr. Joseph Zuckerman, the former president of the American Academy of Orthopaedic Surgeons (AAOS).

During his residency training, Dr. Capogna received the Nate Bondi Resident Leadership Award as well as the Ralph Lusskin Chief Resident Teaching Award. Dr. Capogna developed a passion for sports medicine after treating athletes from all walks of life and abilities, from weekend warriors to professional athletes.

He was selected to attend a sports medicine fellowship at the Andrews Sports Medicine & Orthopedic Clinic in Birmingham, Alabama. There, he received specialized training in the diagnosis, management, and cutting-edge surgical treatment of sports injuries under the guidance of Dr. James Andrews, Dr. Lyle Cain, Dr. Jeffrey Dugas, and Dr. Benton Emblom. During his fellowship training, Dr. Capogna was the assistant team physician for the NCAA Division I Troy Trojans. The Troy Trojans football program has developed world-class talent such as New York Giants alumni DeMarcus Ware and Osi Umenyiora. In addition, Dr. Capogna also took part in the care of athletes from the University of Alabama, Auburn University, the Birmingham Barons minor league baseball team, and professional wrestlers from World Wrestling Entertainment (WWE).

Common sports procedures he performs include: