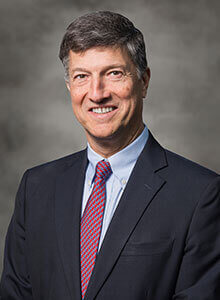 Peter Stein, MD, graduated from Lafayette College with a bachelor of arts in biology in 1983 and received his medical degree from Cornell University Medical College in 1987. He completed a one-year internship in general surgery followed by a four-year residency in orthopedic surgery at St. Luke's-Roosevelt Hospital Center in New York City.

Dr. Stein then completed a one-year hand and microvascular surgery fellowship at New York University Medical Center followed by a prestigious AO International Trauma Fellowship in Basel, Switzerland. He has also had international surgical experience in Hong Kong, Sweden, and China. He joined Orthopaedic Associates of Manhasset in 1993.

Dr. Stein is an attending surgeon at North Shore University Hospital in Manhasset and St. Francis Hospital in Roslyn, where he is the chief of the Division of Hand Surgery. He is a clinical assistant professor of orthopedic surgery at The Donald and Barbara Zucker School of Medicine at Hofstra/Northwell, where he teaches both medical students and resident physicians.

In addition, Dr. Stein has held academic appointments at Cornell University Medical College, Columbia University College of Physicians and Surgeons, New York University Medical Center, and Albert Einstein College of Medicine. He has served as chief of the Division of Hand Surgery at North Shore University Hospital in Manhasset and as a hand surgery consultant for the Long Island Ducks minor league baseball team.

Dr. Stein is an orthopedic hand surgeon who treats patients both surgically and nonsurgically. He has special interests in hand and wrist fractures, sports-related injuries, carpal tunnel syndrome and other upper extremity nerve compressions, Dupuytren's disease, and arthritis of the hand and wrist.

Dr. Stein has lectured on numerous topics in hand surgery locally, nationally, and internationally. He is published in several peer-reviewed journals and has presented at multiple national and international conferences.

In addition to his practice, Dr. Stein is passionate about helping the Indian Health Service (IHS), an agency within the Department of Health and Human Services responsible for providing health services to Native American Indians. He travels to Chinle, Arizona, on a regular basis to perform volunteer surgery on a Navajo reservation.